In the latest edition of our blog series, we have focused on the following two recent publications, which describe highly useful synthetic transformations using alcohols as precursors:

Carbon-centred sp3 radicals are considered powerful intermediates when it comes to the installation of complex fragments for the synthesis of new organic compounds; and these alkyl radicals are usually generated from the corresponding halide precursors. Alcohols, less used for that purpose, are actually ideal precursors for alkyl radicals because they are stable, cheap and naturally abundant in organic compounds. All relying on transition metal complexes (as coupling catalysts and/or as photocatalysts), several methodologies using visible-light photoredox catalysis have been developed for the deoxygenative activation of alcohols to forge C(sp3)–C(sp2) bonds with heteroarenes, and more recently electrochemistry methods coupled with nickel catalysis have been identified as good alternatives.

However, considering the price and toxicity of transition-metal compounds and the difficulty of removing metal residues from final molecules, considerable efforts are being made to develop metal-free organic transformations. With that in mind, M. Nappi and his group at the University of Santiago (Spain) have developed a general metal-free platform for the deoxygenative coupling of alcohol-derived benzoates and activated pyridines promoted by visible light using very mild and water-compatible conditions with good yield.1

Mechanistic studies and control experiments have shown that the reaction proceeds via a final radical-radical coupling; both radicals obtained from the benzoate ester and the pyridine upon a photoinduced single electron transfer (SET) with the Hantzsch ester (HE). 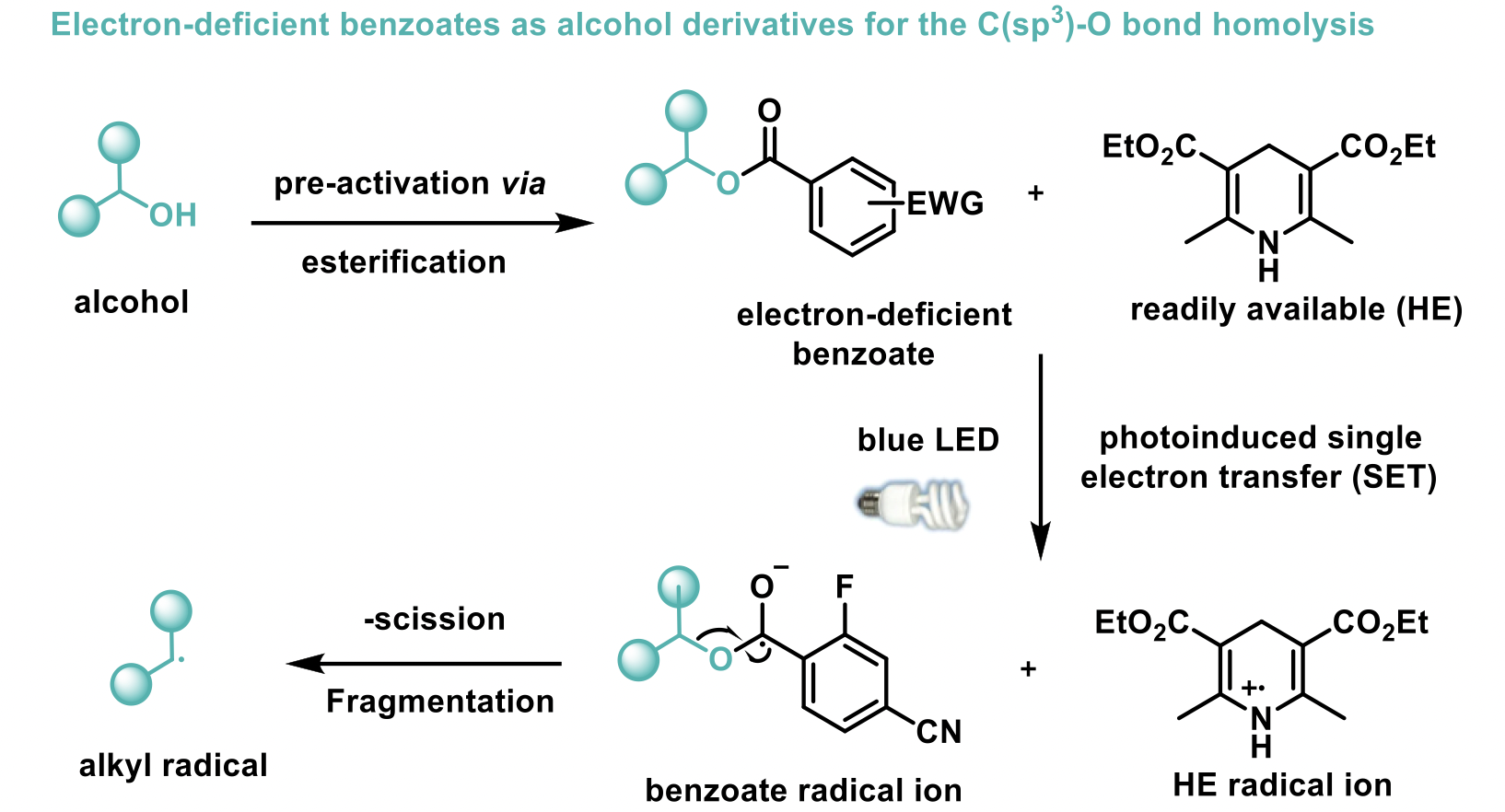 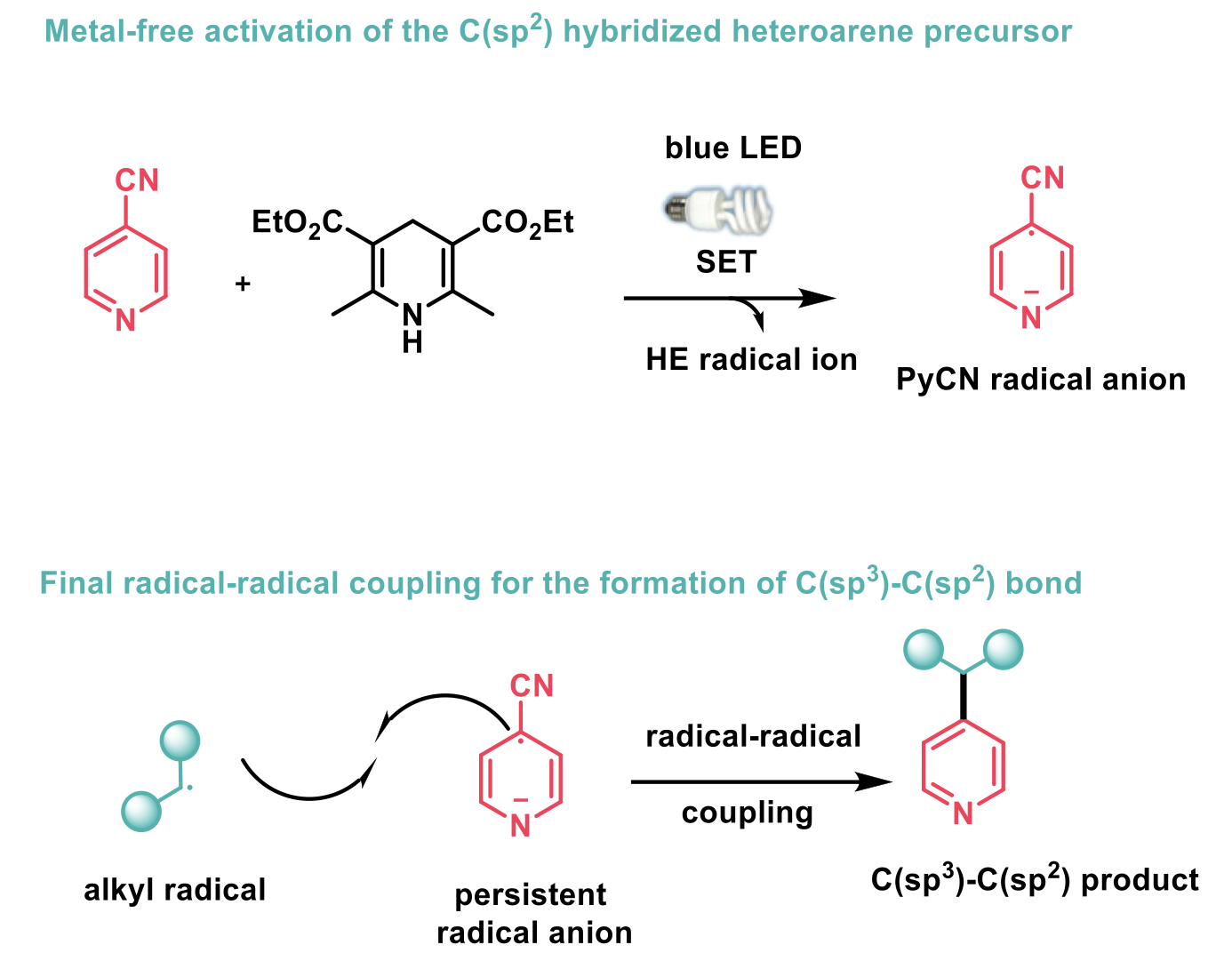 The scope of the reaction includes the formation of challenging tertiary and quaternary centres. A wide variety of primary, secondary, tertiary and complex substituted alcohols bearing heterocycles were successfully derivatised to the corresponding activated benzoates esters and coupled very effectively with the cyanopyridines to give the desired compounds with good yields. Also, cyclic and acyclic tertiary alcohols, as well as benzylic alcohols with electron withdrawing and donating substituents, were all readily converted to the required final products despite steric hindrance. Finally, this method was also amenable to non-benzylic substrates such as allylic and tertiary α-keto alcohols, the latter representing the first example of a deoxygenative cross-coupling reaction with tertiary α-keto alcohols.

This methodology was also suitable and applicable in the context of the late-stage functionalisation of top-selling alcohol-containing pharmaceuticals such as haloperidol and ezetimibe. 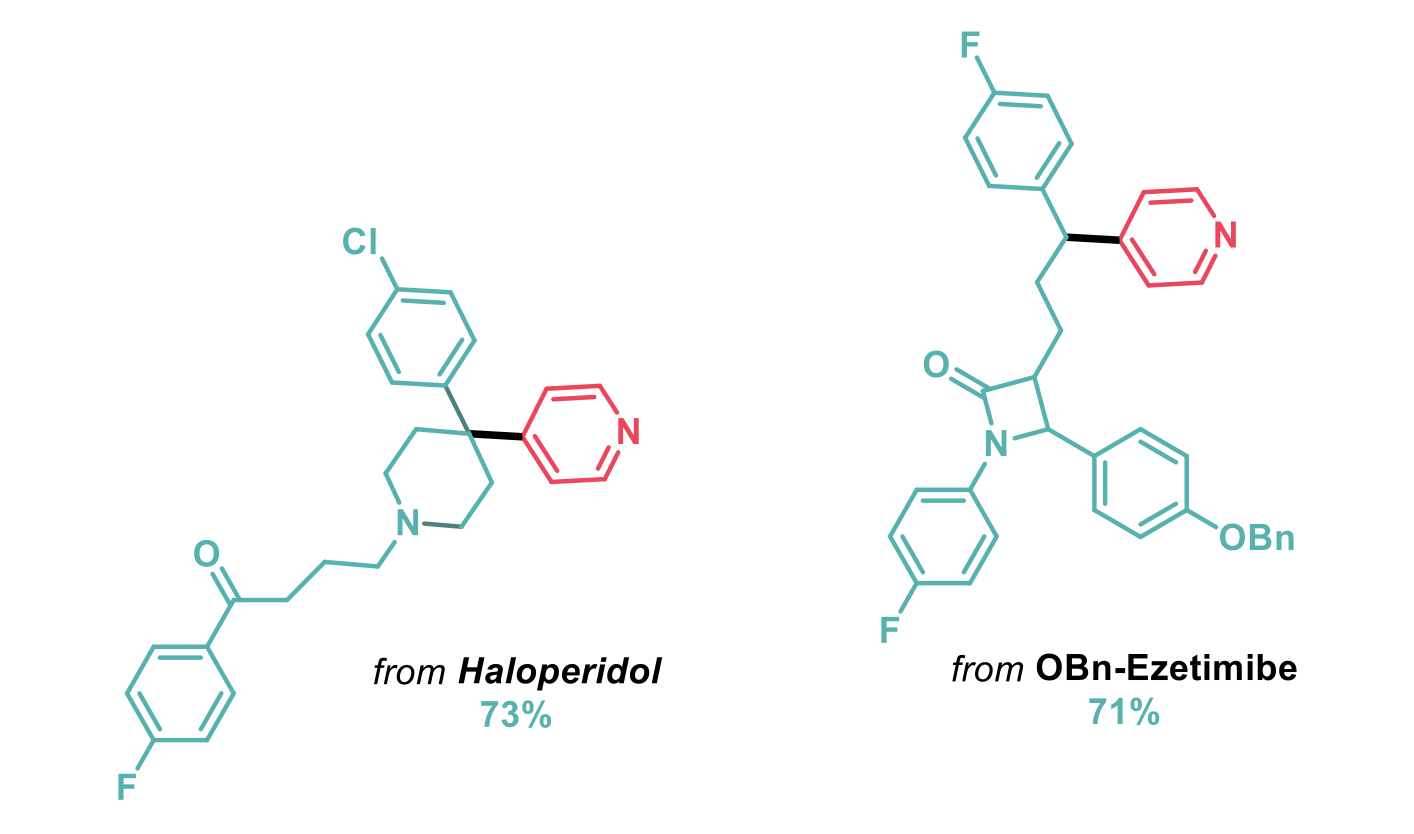 The authors also demonstrated that this new protocol could be used for the synthesis of DNA-encoded libraries (DELs) by functionalising a DNA–pyridine conjugate with a variety of pre-activated alcohols under diluted aqueous conditions in just 75 minutes under visible light irradiation. During the reaction, the DNA remained intact despite the photochemical process and no oxidation was observed by mass spectrometry. Importantly, a DNA headpiece lacking the cyanopyridine group remained unaffected, confirming the excellent chemoselectivity of their methodology.

Organic azides represent an important class of compounds, with heavy use as precursors for nitrenes, amines, and triazoles. Typical preparation relies on nucleophilic substitution with an azide ion (N3-) or diazo-transfer for synthesis from primary amines. To overcome the need for genotoxic alkyl halides, direct conversion of readily available alcohols by deoxyazidation using a simple azide source is an attractive proposal. The inherent drawback of this is that alcohols are typically poor leaving groups. To overcome this, the authors describe a general method for the conversion of alcohols to alkyl azides with NaN3 enabled by the use of the previously developed deoxyfluorination reagent ‘SulfoxFluor’.2

Optimisation studies show that whilst some other sulfonyl / sulfonimidoyl fluorides could also enable reactivity, SulfoxFluor afforded the best results. The choice of solvent appeared to have a strong influence on the selectivity of the reaction with solvents other than DMF giving rise to alkyl fluorides.

DBU proved to be the optimal base and the use of other bases produced no reactivity and instead returned alcohol starting material. The authors examined their deoxyazidation conditions on fifty structurally diverse primary and secondary alcohols. Moderate to excellent yields were obtained across an impressive range of functionality, nearly half of which were pharmaceutically important molecules. For example, PlueroMutilin, Metronidazole and Isosoribide-2-acetate all underwent deoxyazidation in excellent yield under the standard conditions. This excellent tolerance of functionality highlights the capability of the protocol for the late-stage modification of complex structures. The authors also demonstrate the scalability of the procedure via the gram-scale deoxyazidation of a dansyl chloride derivative, again achieving excellent yield.

Experimental control reactions probing the reaction mechanism show that initial reactivity is observed between SulfoxFluor and the alcohol (activated by DBU) to form a sulfonimidate ester, which then undergoes nucleophilic displacement of the sulfonimidate group by N3- to give the desired alkyl azide.