At Domainex we regularly review the literature to make sure we are aware of the latest developments. Therefore, we thought we would start a blog series highlighting exciting new medicinal chemistry articles (we’ve already started a synthesis blog series: click here to read the first article). In this first blog, we have focussed on the topic of Factor XIa inhibitors. This is a particular area of interest to us, since Domainex is working with LUNAC Therapeutics to develop inhibitors of the related protease target, activated Factor XII.

Thrombosis is an occlusive blood clot that originates in an artery or a vein, and is the common pathology of thrombotic diseases such as ischemic heart disease, ischemic stroke, and venous thromboembolism.

For decades, warfarin and heparin were the most efficacious drugs for treatment and prevention of these diseases, but they are associated with a narrow therapeutic index and an increased bleeding risk. Current anticoagulants are also associated with this risk because they target pathways that are related to hemostasis. These unwanted side-effects led to the development of drug targets offering an effective anticoagulant effect without an enhanced risk of major bleeding.

Several preclinical studies showed that inhibition of FXI (antisense oligonucleotides or neutralizing antibodies) or FXIa (small-molecule inhibitors) could provide antithrombotic efficacy with a low risk of bleeding in animal thrombosis models. In addition, it is shown that FXI gene disruption in mice does not lead to an increase in bleeding times, and human subjects with FXI deficiency (such as hemophilia C) do not suffer spontaneous bleeding. Furthermore, a recent phase II clinical trial with an antisense oligonucleotide, targeting FXI proved efficacious in preventing venous thrombosis in patients undergoing total knee arthroplasty, and appeared to be safe with respect to bleeding. Taken together, these cases suggest that FXIa may serve as a powerful target to achieve an antithrombotic effect, safer than targeting FXa or thrombin.

A recent collaboration between Bristol-Myers-Squibb and Janssen provided Milvexian (formerly referred to as BMS-986177/JNJ-70033093), an active-site inhibitor of FXIa with high affinity and selectivity for FXIa and oral bioavailability in preclinical studies.2 Milvexian has demonstrated antithrombotic activity in preclinical models of arterial and venous thrombosis, while preserving hemostasis. Currently, phase II studies of Milvexian are underway for the secondary prevention of major cardiovascular events in patients with acute ischemic stroke and for the prevention of total venous thromboembolism events in patients undergoing total knee replacement surgery.

The development of Milvexian started from macrocycle 1, which, despite a good PK profile, suffered from poor solubility due to the extensive intramolecular H-bonding involving the carbamate moiety in the P2’ region (Figure 1). The replacement of the carbamate in P2’ with a CHF2-containing pyrazole disrupted the H-bonding network and increased the solubility. Further tuning of the P1 region and the use of a pyrimidinone as a linker ensured the optimal metabolic stability and binding affinity/selectivity for FXIa.

A recent study described the discovery of novel FXIa inhibitors through the aid of molecular modelling and further SAR studies (Figure 2).3 Crystallographic and CADD analysis revealed that the P1’ region has a large pocket which can accommodate substituents on the para position of aromatic groups. The installation of a carboxamide p-substituent with a bulky aliphatic substituent, such as methyl cyclopropane, provides superior hydrophobic interactions with residues in the P1’ pocket. This resulted in a 300-fold boost in binding affinity for FXIa for compound 3, and retained FXIa selectivity against FVIIa, FXa and thrombin. Further in vivo efficacy tests in the rabbit arteriovenous shunt model suggested that compound 3 might potentially be an efficacious agent in the treatment of thrombotic diseases.

Modelling studies docking compound 4 in the active sites of FXIa and FIIa catalytic domains revealed how the size and nature of substituents interacting with the S2 and S4 pockets could reverse the selectivity towards FXIa or FIIa.4 In this context, a bulky cyclohexylmethyl group (Figure 3, compound 4) can fit the lipophilic deep S4 pocket for FIIa binding while a linear and smaller substituent provides improved interaction for the FXIa pocket. On the other hand, a larger substituent on the proline C4 atom would diminish the binding affinity for FXIIa with fewer effects on FXIa, or even with additional interactions to enhance FXIa potency in the S2 pocket. Inspired by these hypotheses, Merck developed compound 5 which features a reverse of the FXIa/FIIa selectivity previously observed for compound 4. 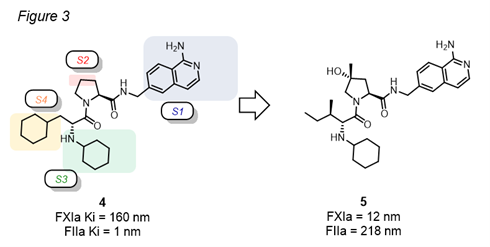 Overall, FXIa inhibitors have the potential to serve as an alternative to the current antithrombotic drugs and anticoagulant therapies. Current efforts are focussing on the development of oral FXIa inhibitors with higher binding affinity and selectivity over other clotting factors in the coagulation cascade.