In the latest edition of our blog series, we have focused on the following two recent publications, which describe highly useful synthetic transformations:

Amine functional groups are present in 43% of small molecule drug candidates, and 60% of these compounds contain a tertiary amine.  The syntheses of simple tertiary amines are familiar to the synthetic chemist, but the synthesis of complex, allylic amines represent a specific challenge, requiring long linear syntheses or the handling of unstable precursors.  Consequently, the direct C-H amination of unactivated terminal alkenes represents an attractive synthetic transformation for medicinal chemists. Christina M. White’s group at the University of Illinois has developed a palladium-catalysed allylic amination of unactivated terminal alkenes using transient amine-BF3 complexes, along with dibutylphosphate as an additive, and 2,5-Dimethyl-1,4-benzoquinone (2,5-DMBQ) as a stoichiometric oxidant.1

The reaction is robust, requires no special precautions to exclude air and water, and has a broad functional group tolerance – more complex sterically constrained amines furnish better yields due to less side reactions occurring compared to smaller, simpler amines.  Labile functional groups (e.g. epoxides and THP-protected alcohols) are tolerated, as well as internal olefins and alkynes.  The products are formed with exquisite regio- and stereoselectively (linear:branched, and E:Z ratios >20:1), and the chirality of starting materials is retained.

To further demonstrate the synthetic utility of this reaction to medicinal chemists, 21 drugs and drug derivatives were synthesized using this protocol, such as the ones shown below.

α-Hetero-functionalised 2-oxazolines have a diverse range of applications in synthetic chemistry including the synthesis of natural products, biomaterials, biologically active compounds and as ligands in transition metal chemistry. Furthermore, 2-oxazoline as a masked carboxylic acid has the capacity to be readily converted into a plethora of desirable functionalities such as ketones, acids, esters and more. The procedure developed by Zhang and co-workers utilizes a novel sulfur (IV) mediated umpolung strategy to access this important class of compounds.2 In contrast, previous strategies reported in the literature for umpolung chemistry have relied on hypervalent iodine compounds and enol silyl ethers.

The scheme below demonstrates the planned design of this transformation.  The first part of the transformation is the ‘assembly’ of an electrophile-activated sulfoxide with 2-oxazoline followed by subsequent deprotonation which then can undergo nucleophilic addition to obtain the desired umpoled 2-oxazoline.

The optimised reaction conditions are shown below. The reaction scope was broad, affording the desired umpolung 2-oxazolines in moderate to good yields, notably on the gram-scale as well as small trial scale. Interestingly, the practicality of the method was successfully applied to a complex molecule namely ceritinib (LDK378), a novel ALK inhibitor for Non-Small Cell Lung Cancer (NSCLC), which bears multiple vulnerable functional groups such as aryl amines and pyrimidines. 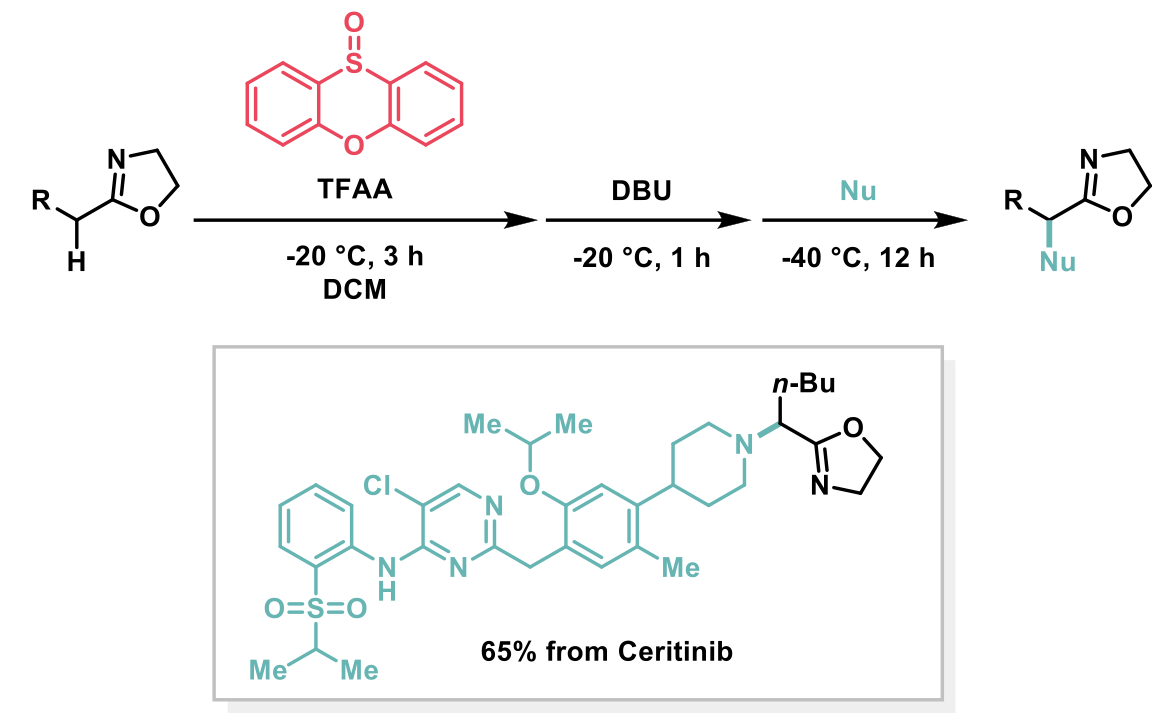 Jul 7 Innovative New Pharma and Biotech Partnerships: How is the landscape transforming?