Will the rise of biologics be the death of traditional medicinal chemistry? 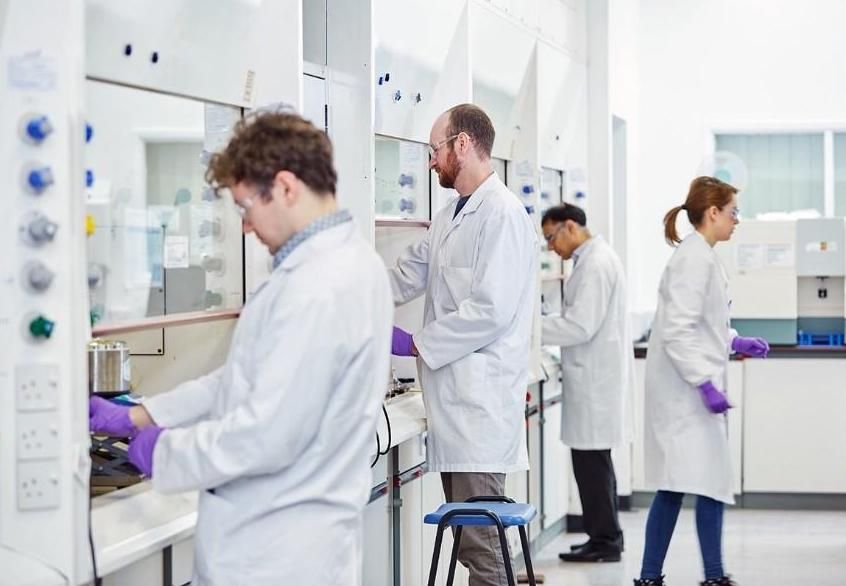 Drug discovery brings together experts from a range of specialisms including medicinal and computational chemistry, analytical sciences (including ADME and bioanalytical), assay biology, in vitro pharmacology, protein science and structural biology, to find solutions to today’s biggest health challenges. Traditionally, the treatment of human disease has been facilitated by medicinal chemistry involving the design and synthesis of small molecule compounds with potential therapeutic utility. Owing to their small size and favourable physicochemical properties, small molecules are extremely versatile; they can be potent and selective enzyme inhibitors and allosteric modifiers of intracellular targets as well as modifying membrane-bound targets such as G-protein coupled receptors, ion channels and transporters. However, the risk of potentially harmful side-effects associated with small molecule drugs and the desire to reach previously undruggable targets has led to increased research into more targeted therapies.

The beginnings of biologics

About 35 years ago, advances in biotechnology first enabled the synthesis of biological molecules. Humanised insulin was first approved in 1982 and by the mid-1990s analogues of the protein, with an edited amino acid sequence to alter its properties, were marketed. This marked a new era in the pharmaceutical industry: here were protein drugs that could be designed to hit a range of biological targets, blocking the function of proteins that were previously difficult or impossible to influence with small molecules.

Since then, the repertoire of biologics therapies has expanded to include vaccines, monoclonal antibodies, cell and gene therapies and many more. Most notably Humira, a monoclonal antibody therapy for the management of rheumatoid arthritis, was the best-selling pharmaceutical in the USA in 2019.[1]

But what are the advantages and limitations of biologics compared to small molecule drugs? How are both technologies driving innovation and what does this mean for drug discovery at Domainex?

What are the advantages?

As the name suggests, biologics are medicines made from substances found in living matter and include a wide variety of products derived from humans, animals, or microorganisms. These proteins are large, complex molecules, with unique three-dimensional structures integral to their biological activity. This structural complexity allows biologics to bind to targets with high specificity, achieve more potent interactions with the target and offers less potential for off-site interactions. Since specificity impacts safety, patients can be offered better targeted treatments. A great example of this is the success of biologics in treating major chronic diseases, such as forms of cancer and autoimmune diseases, more effectively and with fewer side effects than alternatives. In these disease areas the effects of biologics and cell therapies are profound and small molecules cannot always achieve the same levels of pharmacological activity. This targeted efficacy profile, combined with an ageing population that are more susceptible to such diseases, means biologics research has never been more relevant.

Despite all the attention directed at for instance CAR-T cell therapy and CRISPR gene editing, synthetic small molecules still remain an essential component in the medical toolbox of disease treatments. Compared to biologics, small molecule drugs are structurally much simpler and can be manufactured using standard synthetic routes, resulting in reduced manufacturing complexity and costs. They can be administered by a variety of routes and their oral bioavailability is one of the key advantages over biologics. Their stability is another key advantage when compared to biologics which typically have a shorter shelf life and generally require special storage conditions. In addition, the average daily dose of a biologic costs 22 times more than that of a small molecule. This is evident in the high percentage of spending on biologics even though they still only make up a small proportion of prescriptions (Figure 1).[2] 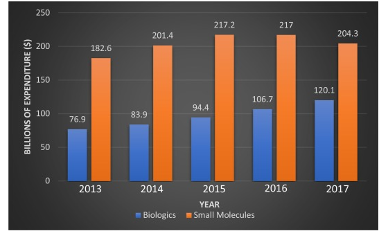 Significant advances in drug discovery technologies have greatly improved small molecule development in recent years including computer-aided and structure-based drug design (CADD and SBDD respectively), fragment-based drug discovery (FBDD) and advances in assay screening technologies. The use of artificial intelligence has the potential to allow further advances to be made by reducing drug discovery timelines and the attrition inherent in the process. As such, small molecules continue to be an important part of medical research.

Challenges and limitations of each approach

Therapeutic proteins are usually polar, heat sensitive, membrane impermeable and subject to enzymatic degradation. As a result, many biologics are orally inactive and most require invasive delivery such as injection.

A large proportion of pharmacological targets are embedded in the central nervous system (CNS), beyond the blood-brain barrier (BBB). Tight junctions within the BBB prevent the passage of large molecules, thus preventing almost all biologics entering the CNS.

Quality control measures for biological therapies are often more rigorous, and therefore more costly, to avoid issues throughout the manufacturing process. Potential problems include variations in functional groups (e.g. by unintended glycosylation, methylation or phosphorylation) or a structural change that could alter the biologic’s activity in the body. Characterising biologics by conventional methods is also difficult due to their structural complexity. State-of-the-art techniques are essential to prove activity, stability and reproducibility of biologics if regulatory requirements are to be met. Whilst this presents a challenge for drug developers, this has increased demand for expert assay biology and structural biology services such as those offered at Domainex.

Small molecules have the potential for off-target interactions as they lack the intrinsic specificity heralded by biologics. Sometimes these can be harmless, but in many cases they lead to adverse side effects. Cancer chemotherapy, using small molecule agents such as paclitaxel or docetaxel, is a notorious example of this; the small molecules interact with tissues, cells and cellular components in unintended and undesirable ways, affecting normal healthy cells as well as the target tumour cells. Reduced tolerability of small molecule drugs significantly limits the use of more potent cytotoxins which have the potential to better perform their desired function.

Whilst therapeutic proteins typically bind with high specificity to their targets on cell surfaces or intracellular components, these molecules are not without risk. Impeding vital physiological functions can lead to rare but life-threatening events related to immunogenicity, cytokine release syndrome and encephalopathy.

So where are we heading?

The advent of newer technologies and a deeper understanding of the pharmaceutical processes these provide inevitably leads to newer more effective drugs. All of this has encouraged a move away from a one size fits all treatment approach towards more targeted medications to treat specific groups of patients.

The debate around small molecules versus biologics reminds us that there remains a place for both modalities in drug discovery. For the most part, biologic therapies are hitting targets that small molecules have not been able to, thereby expanding the reach of treatments. Competitive equilibrium will be maintained between small molecules and biologics and will likely lead to the development of more hybrid forms of therapeutics such as antibody drug conjugates (ADCs). This in turn will lead to an increase in rational design throughout the drug discovery process and demonstrates the advantages of a truly integrated approach.

It is noteworthy that over the last decade there still continues to be a larger number of small molecule drugs approved by the FDA than biologics, however, both small molecules and biologics will continue to be part of our arsenal to tackle disease for the foreseeable future.[3]

How do you choose between HTS, virtual screening and FBDD?

May 25 Adventures in Drug Discovery: The Quest for Your Best Small Molecules