Domainex helped develop what are believed to be the first published small molecule antagonists with nanomolar potencies for the neuropilin 1 (NRP1) receptor. 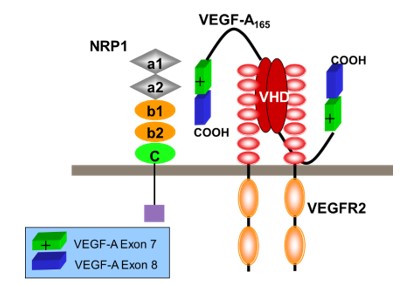 Figure 1: Model for binding of VEGF-A165 to NRP1. NRP1 has a large extracellular (Ex) domain comprising tandem a1/a2, b1/2, and a c domain, a single membrane-spanning domain, and a small cytosolic domain. The VEGF-A165 C-terminal domain encoded by exons 7 and 8 (green and blue respectively) binds to the extracellular NRP1 b1 domain. Concomitant binding of the VEGF homology domain of VEGF-A165 (solid red ovals) to VEGFR2 results in formation of a receptor complex of NRP1 with VEGF-A165 and VEGFR2 resulting in enhanced intracellular signalling, essential for optimal migration and angiogenesis in development and in tumours.

NRP1 has been implicated in tumour growth and angiogenesis. Pan et al.2 have shown that inhibition by a blocking antibody that prevents VEGF-A binding to NRP1 enhances the anti-tumour effects of the inhibitory anti-VEGF-A antibody, bevacizumab (Avastin®) in mouse xenograft models. It is therefore believed that a small molecule inhibitor of NRP1 function would be desirable, but inhibitors of protein-protein interactions (PPIs) are not trivial to develop.

Starting with the full Exon7-8 sequence, by making a series of truncated molecules we discovered that the C-terminal peptide Ac-RXDKPRR-OH (where X=2-aminobutyric acid) of VEGF-A retained significant affinity for NRP1. Substitution of the nonessential penultimate arginine to alanine and N-terminal truncation led to the discovery that peptide H-KPAR-OH, was a significantly active inhibitor with a minimal peptide sequence. Our medicinal chemists performed some SAR studies around this template (Table 1) and this information was used as the starting point for the subsequent design of peptidomimetics.

Mutagenesis studies localised VEGF-A binding to the NRP1 b1 domain and a binding pocket was identified. Figure 2 shows the key residues – one of which was Asp320 – which formed a guanidine-binding pocket.

We undertook a programme of medicinal chemistry, applying a peptidomimetic approach, and this work resulted in the design and synthesis of EG00229 (Figure 3).

NRP1 blockers have the potential to target angiogenesis, tumour growth and metastasis and may provide a valuable alternative to targeted cancer therapy, particularly relevant in the light of concern over findings showing that anti-VEGF agents may stimulate metastasis.3 We designed and synthesised EG00229, the first small-molecule ligand of the VEGF-A165 receptor NRP1. EG00229 and its analogues made excellent tools for the study of NRP1 biology and provided a point of departure for the development of more potent anti-NRP1 drugs.4

This work resulted in two publications.1,5

Tankyrase: Inhibitors for the treatment of solid tumours

Der p 1: Protease Inhibitors for the treatment of asthma

Domainex collaborated with St George’s University London & the University of Manchester on a programme of drug discovery which led to the successfully nomination of a candidate drug. View more

FLIPP-FADD: PPI inhibitors for the treatment of solid tumours

Ras: PPI inhibitors for the treatment of cancer

G9a: Lysine Methyltransferase Inhibitors for the Treatment of Cancer

Starting from a LeadBuilder screen we identified novel potent inhibitors of G9a, which have potential to be developed as treatments for a range of solid tumours. View more

Domainex identified several highly efficient fragment hits and after one round of elaboration a 10-fold increase in affinity was achieved. View more

We designed and synthesised EG00229, the first small-molecule ligand of the VEGF-A165 receptor NRP1. View more

Case studies using our patented combinatorial domain hunting (CDH) technology, which has been applied to over 60 targets in a wide range of target classes. View more